Born to Run The Kudu Chase

We had been hunting for two weeks with no luck. It was at the end of the dry season and the dry grass made it difficult to stalk close enough to animals to get a good shot with a bow and arrow. That morning we were tracking a healthy kudu bull. By midday we caught up with it, but again it ran away. This was when !Nate (photo), Kayate and Boroh//xao decided to run it down. It was an extremely hot day and conditions were ideal for persistence hunting. !Nam!kabe, who was too old to run far, went back to our camp with all our unnecessary weight – bows and arrows, digging sticks, clubs and my camera equipment. They told me to go back with !Nam!kabe, because no white man can run down a kudu in such heat. But I insisted that I had to run with them so that I can see how they do it.

So we drank our fill, emptying the water bottles before setting off at a stiff pace. Even at the outset my boots felt heavy and I found it difficult to keep up the pace in the sandy terrain. At times they would run away from me, but when they lost the spoor and were delayed in looking for the spoor I managed to catch up with them. At times they would fan out, each hunter making a prediction of where he thought the kudu was heading, so that if the kudu followed a curved path, one of them would gain an advantage by taking a short cut. The others would then cut back to catch up with the one who picked up the spoor.

Boroh//xao was the first to drop out and start walking. I managed to keep up with !Nate while Kayate had increased his pace and was pulling away from us. When we got to some thick bush, however, I lost sight of !Nate who was about a hundredmeters ahead of me. The terrain was difficult in places and several times I lost the trail. In the process Boroh//xao had caught up with me again, and since I was quite exhausted by that time, decided to follow the trail with him at a fast walking pace.

As we followed the tracks I could visualise the whole event unfolding in front of me. The kudu started to show signs of hyperthermia. It was kicking up sand and its stride was getting shorter. As it ran from shade to shade, the distances between its resting periods became shorter and shorter. In visualising the kudu I projected myself into its situation. Concentrating on the spoor I was so caught up in the event that I was completely unaware of my own state of exhaustion. As if in an almost trance-like state I could not only see how the kudu was leaping from one set of tracks to the next, but in my body I could actually feel how the kudu was moving. In a sense it felt as if I myself actually became the kudu, as if I myself was leaping from one set of tracks to the next. 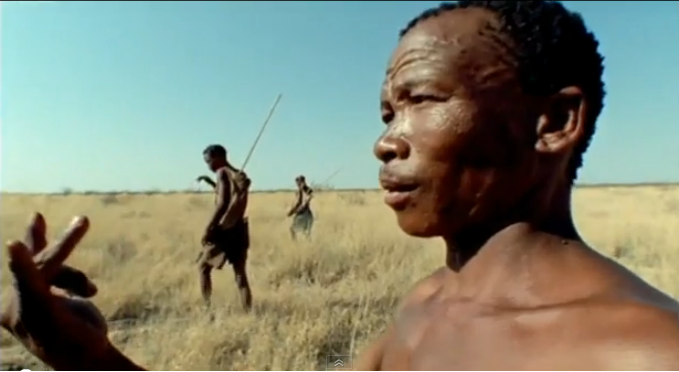 Every time Kayate and !Nate caught up with it, it would run away, leaving them behind. But while it accelerated from its resting position and stop to rest again, the hunters were running at a constant pace. The distinctively human sweating apparatus and relative hairlessness give the hunters an advantage by keeping their bodies cool in the midday heat. But in the process they risk becoming dehydrated. The hunters therefore have to know their bodies and measure their own condition against that of the kudu. If they run too fast, they will exhaust themselves or overheat, but if they do not run fast enough, they will never exhaust or overheat the kudu. They must run fast enough not to allow the kudu too much time to rest, which is when the kudu cools down, restoring core body temperature.

We could see from the spoor that Kayate had dropped out and that only !Nate was chasing it. Boroh//xao pointed to the moon and said that the kudu will get away, because the moon was out in daylight. But by this time the kudu seemed to be so exhausted that I insisted that we should carry on. At one point a cold shiver went through my whole body and for the first time I realised that I was dragging my feet in the sand. Some times my legs buckled under me and I would stumble over branches, but through intense concentration on the spoor it was as if though my mind was simply dragging my body along.

!Nate had picked up his pace and was closing in on the kudu. With the kudu showing signs of severe exhaustion or overheating, !Nate broke into a sprint, running in front of the kudu and keeping it from getting into the shade. At the same time he tried to cut in front of it to chase it back to Kayate.

When we finally caught up with !Nate and Kayate, they were on their way back to the camp. When I asked !Nate where the kudu was, he told me that it got away. When he saw the disappointment on my face he laughed at me, telling me that the kudu was not very far. I asked if I could drink the stomach water of the kudu to quench my thirst. I had drunk the stomach water of gemsbok on a previous hunt, and although it tasted like rotting grass soup, it was not too bad. At this stage I was so thirsty that taste was not much of a concern. But !Nate said that I would die if I drank it, because the kudu was feeding on a leaf that is poisonous to humans. 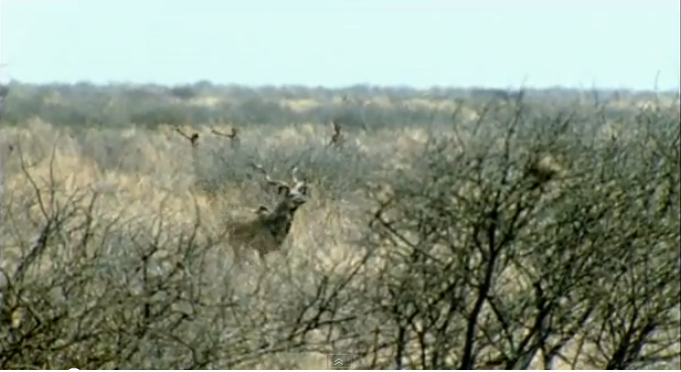 As we started to walk back to our camp, my mind relaxed and I was suddenly overcome by a sense of total exhaustion. My legs were weak and shaky and my mouth was dry. I asked !Nate if there were any succulent roots I could dig up, but he replied that it did not rain in that part of the Kalahari for a long time and that there were no water.

Half way back to the camp I realised that my armpits were bone dry. I had stopped sweating – the first symptoms of heat stroke. As the implications of my situation dawned upon me, I experienced an overwhelming sinking sensation – as if the vast dry Kalahari was like an endless ocean and I was sinking down deeper and deeper.

I found myself in a desperate situation. I had to get into the shade to cool down my body, but at the same time I had to get water as soon as possible. If I dehydrated any further and my body overheated because I no longer produced sweat to cool down, I could die very rapidly. !Nate, who had been watching me closely, realised that I was in serious trouble. He told me that he will run back to our camp and ask !Nam!kabe to bring me water.

After resting in the shade for a while, Kayate urged me to walk further, because the camp was still very far and the sun was going down. Once it got dark, !Nam!kabe will not be able to follow !Nate’s tracks back to find us. Walking very slowly, I experienced the ultimate sense of helplessness. My life depended totally on !Nate. If I tried to walk too fast I could kill myself, yet I had to try and make as much progress as possible because if I did not get water soon I could also die. Every now and then I would rest in the shade, and after a while Kayate would urge me on again. 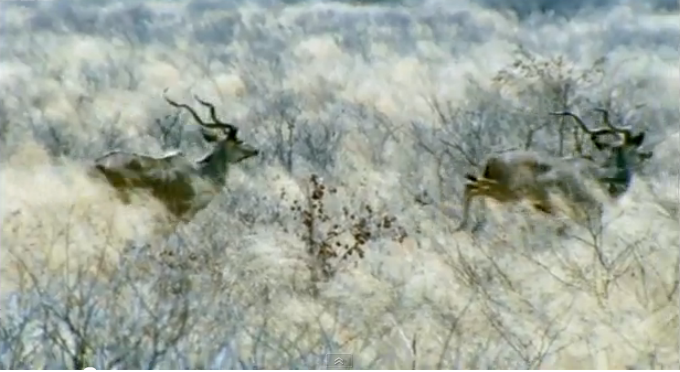 After what seemed to be an eternity the sight of !Nam!kabe carrying several water bottles created an incredible sense of relief. But I still had a long way to go. !Nam!kabe explained that I must not drink a lot of water, because if I drank too much water too quickly I could die. I first had to wash my face and wet my hair to cool down my head. When you suffer from heat stroke you will die if your brain overheats. Only after cooling my head could I take small sips of water, slowly taking in water over an extended period of time.

Later !Nate told me that he also stopped sweating by the time he reached the camp. When he chased the kudu, after everyone else had dropped out, his timing was so fine that had he chased the kudu just a short distance further, he could have killed himself. He risked his own life to save my life.

It took a while for the significance of this single event to sink in. Apart from the fact that I almost lost my life in the process, my spontaneous spur-of-the-moment decision to run with them resulted in something quite unique. For more than fifty years, the Kalahari hunter-gatherers were amongst the most intensively studied population group. Yet, as far as we know, not a single anthropologist had witnessed the persistence hunt. There have been several anecdotal accounts of persistence hunting, but no one (apart from the hunters themselves) had actually witnessed it.

One reason may be that, unlike the bow-and-arrow which draws attention to itself, the persistence hunt requires no weapons. There is therefore no specific weapon or artifact that would prompt an anthropologist to ask hunters about it – and no direct evidence of it in the archaeological record. Unless you already knew about it, it would not occur to you that you should ask hunters about it. /Ui /Ukxa of //Auru village was a young hunter when the Marshall family first arrived in the 1950’s at Nyae Nyae in Namibia. I asked him if anybody have ever asked him about the persistence hunt. He replied: “No, people only asked me about the bow and arrow.” Since nobody asked them, hunters simply never told anthropologists about it. 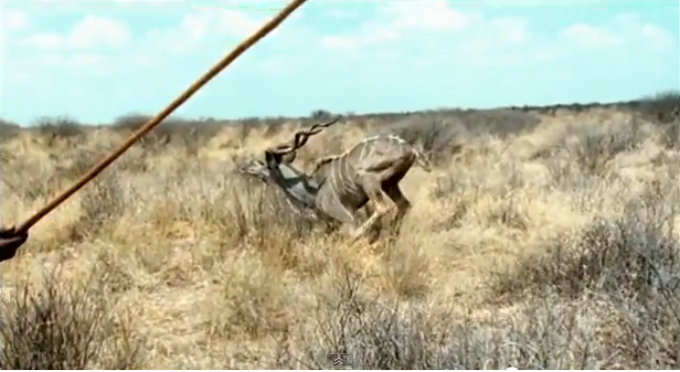 Persistence hunting was probably one of the first forms of human hunting, yet a tradition that lasted perhaps as long as two million years was only witnessed in the very last decade before it died out. In this book I will show that persistence hunting may have played a critical role in the origin of science.

From The Origin of Science (2013) by Louis Liebenberg