The Art of Tracking Celebrating 20 Years of Tracker Evaluations! 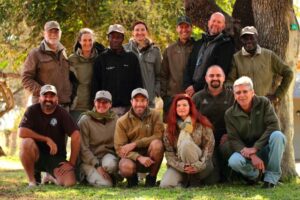 To celebrate 20 years of CyberTracker Tracker Evaluations, initiated in 1994, we organised a CyberTracker meeting where evaluators were able to engage in critical discussion and peer review. Peer review is essential to maintain standards, especially as the network of CyberTracker evaluators continue to grow. Only by testing each other and engaging in critical discussion of evaluation principles, protocols and the interpretation of tracks & signs in the field is it possible to ensure that we all maintain the same standards.

We also discussed the creation of The Tracker Association, which will be based in South Africa, but will be open to all trackers worldwide. In addition to qualified trackers, who will be full members, we will also welcome any tracker who is working towards becoming a qualified tracker. While CyberTracker Conservation is a Public Benefit Organisation whose mission includes maintaining tracker standards through tracker certificates, CyberTracker is not a membership-based organisation. We therefore need a membership-based Tracker Association which can represent and promote the interests of trackers.

It was also great to simply have everyone together around a camp fire, relaxing and telling stories. Shani Preller suggested that the Tracker Association logo should be a camp fire, representing the tracker community. The art of tracking and the making of fire are perhaps the most ancient human traditions.

We are planning to make this an annual event, something that will help to strengthen and grow CyberTracker evaluations into the future.