From its origins with indigenous Kalahari trackers, CyberTracker projects have been initiated to protect rhinos in Africa, to monitor gorillas in the Congo, snow leopards in the Himalayas,
butterflies in Switzerland, jaguars in Costa Rica, birds in the Amazon, wild horses in Mongolia,
dolphins in California, marine turtles in the Pacific and whales in Antarctica. The free, Open-Source CyberTracker software, which since 1997 has been downloaded more than 500 000 times, is being used worldwide by indigenous communities, in protected areas, scientific research, citizen science, environmental education, forestry, farming, and social surveys and disaster relief. It is used by individuals, communities and governments.

The CyberTracker Icon User Interface was originally designed in 1997 for expert indigenous Kalahari San Master Trackers who cannot read or write. This was a ground-breaking innovation for which CyberTracker was awarded the Rolex Award for Enterprise. In addition, scientists and conservationists benefit from the Icon User Interface enabling significantly faster data collection than text interfaces or written methods. The icon interface design also reduces data input errors. 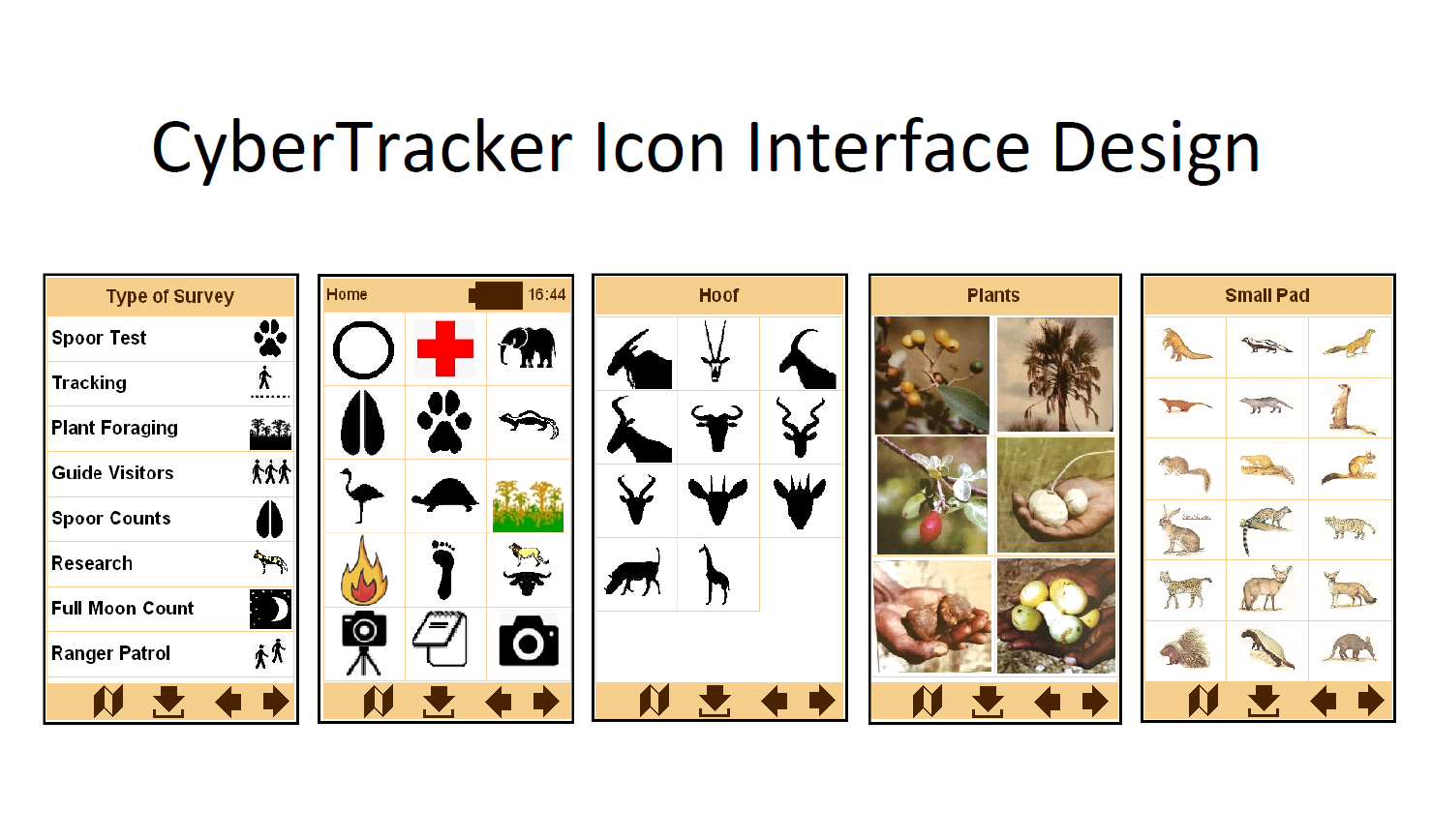 Over the last 25 years, the CyberTracker software has evolved to meet new and growing needs in the field. Through our Partner Solutions with Esri ArcGIS Online, SMART Conservation Tools, EarthRanger, KoBoToolbox and the Trillion Trees project, we have developed advanced technical solutions for protected area management. CyberTracker has also been used for community forest management in the context of REDD.

The CyberTracker/SMART/EarthRanger solutions are top-down centralised implementations,
which means that users cannot add new data fields unless the managers of SMART or EarthRanger adds it for them in the centralised database. CyberTracker Online, in contrast, is a bottom-up distributed implementation, allowing the user to add any arbitrary data fields. This is especially important in scientific research (which by definition explores new knowledge, as opposed to monitoring known variables), as well as location-specific data. To gather complex biodiversity data, a bottom-up distributed approach may grow faster than a top-down approach. Ideally, to manage the complexity of biodiversity conservation, we need to combine top-down implementation with bottom-up initiatives.

There is a critical shortage of technical skills in nature conservation and especially in support of indigenous communities. To scale up the adoption of CyberTracker worldwide we need to minimise the need for technical support. CyberTracker Online will enable users with no technical skills to customise a mobile data capture application to collect complex biodiversity and socio-economic data and to visualise data in maps and tables. Advanced digital solutions can disempower indigenous communities by creating a dependency on expensive consultants. Providing a digital solution for nontechnical users will empower them to become more independent, thereby reducing inequalities and enabling them to manage their own resources. 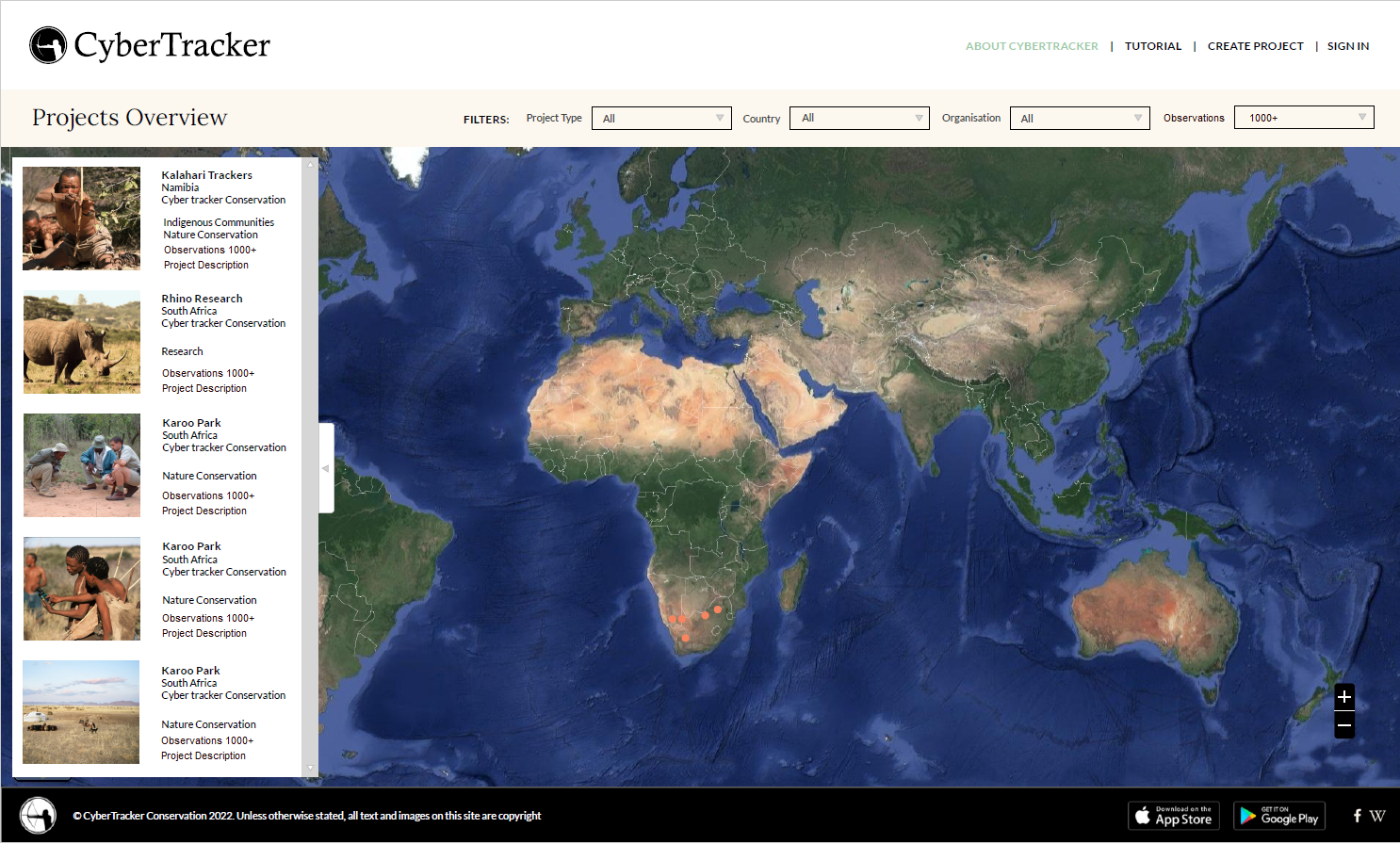 The Project Overview will allow users to describe their projects and add images, videos, reports, articles and papers to demonstrate results. 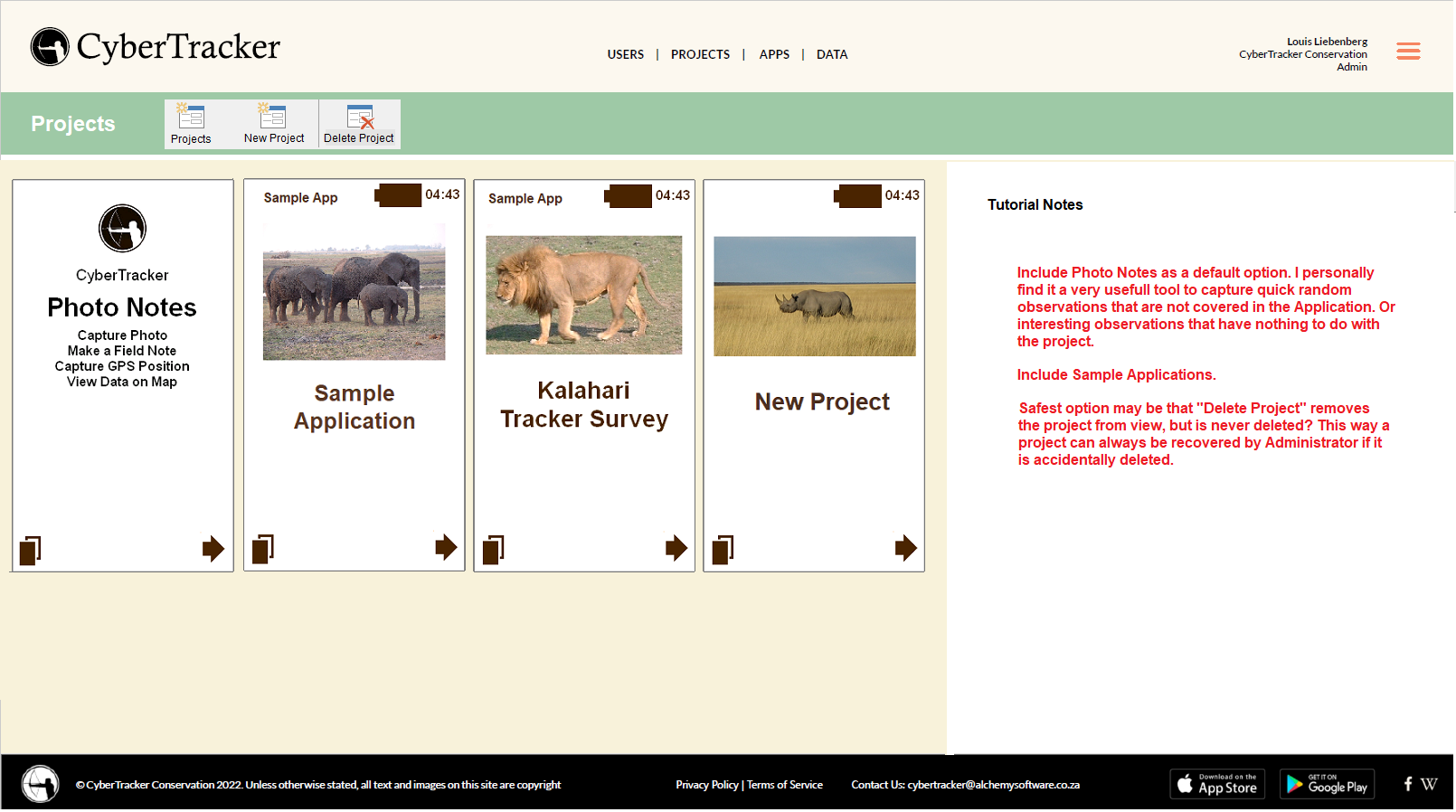 Sample Applications will help new users to get to know how CyberTracker works. 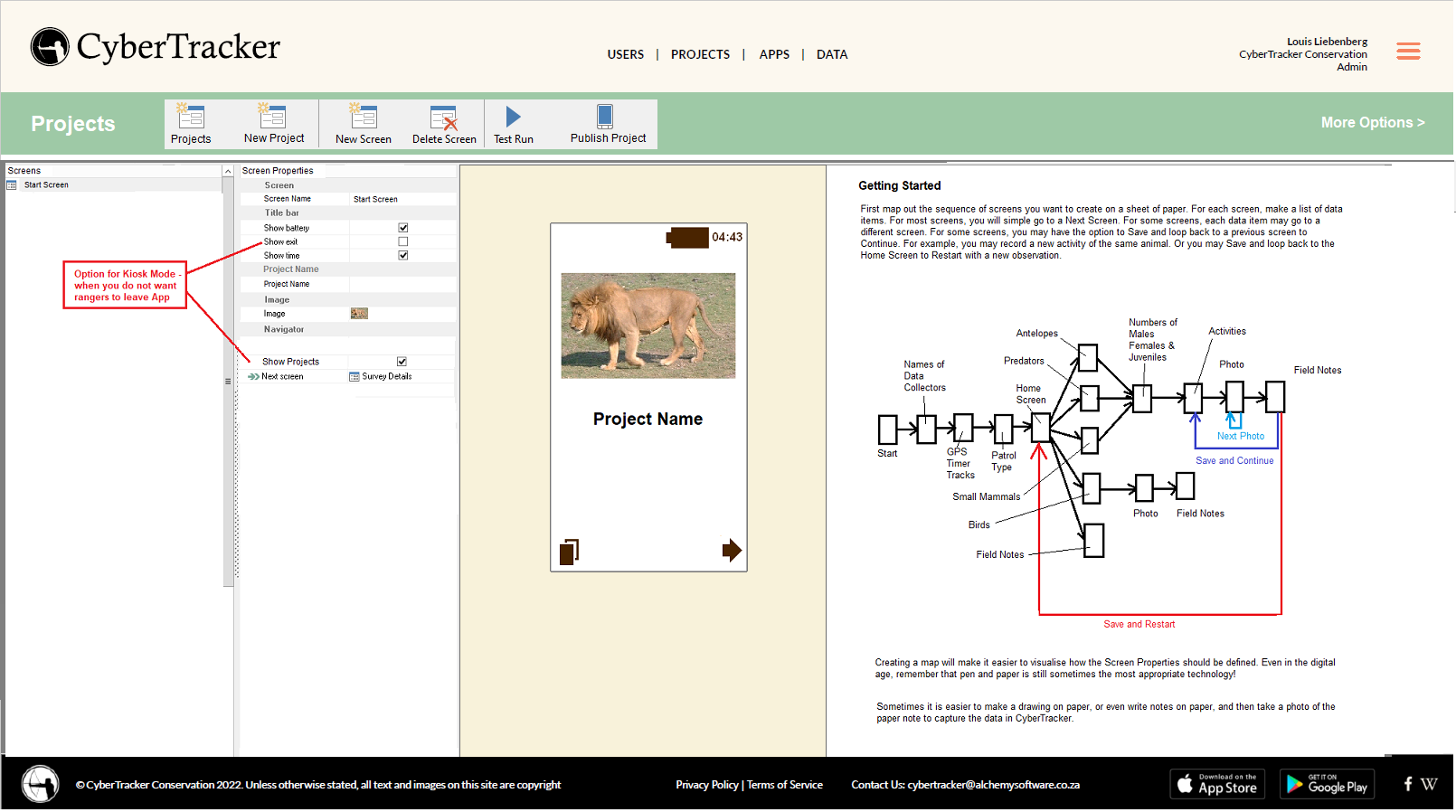 Tutorial notes will be embedded to guide the user through every step. 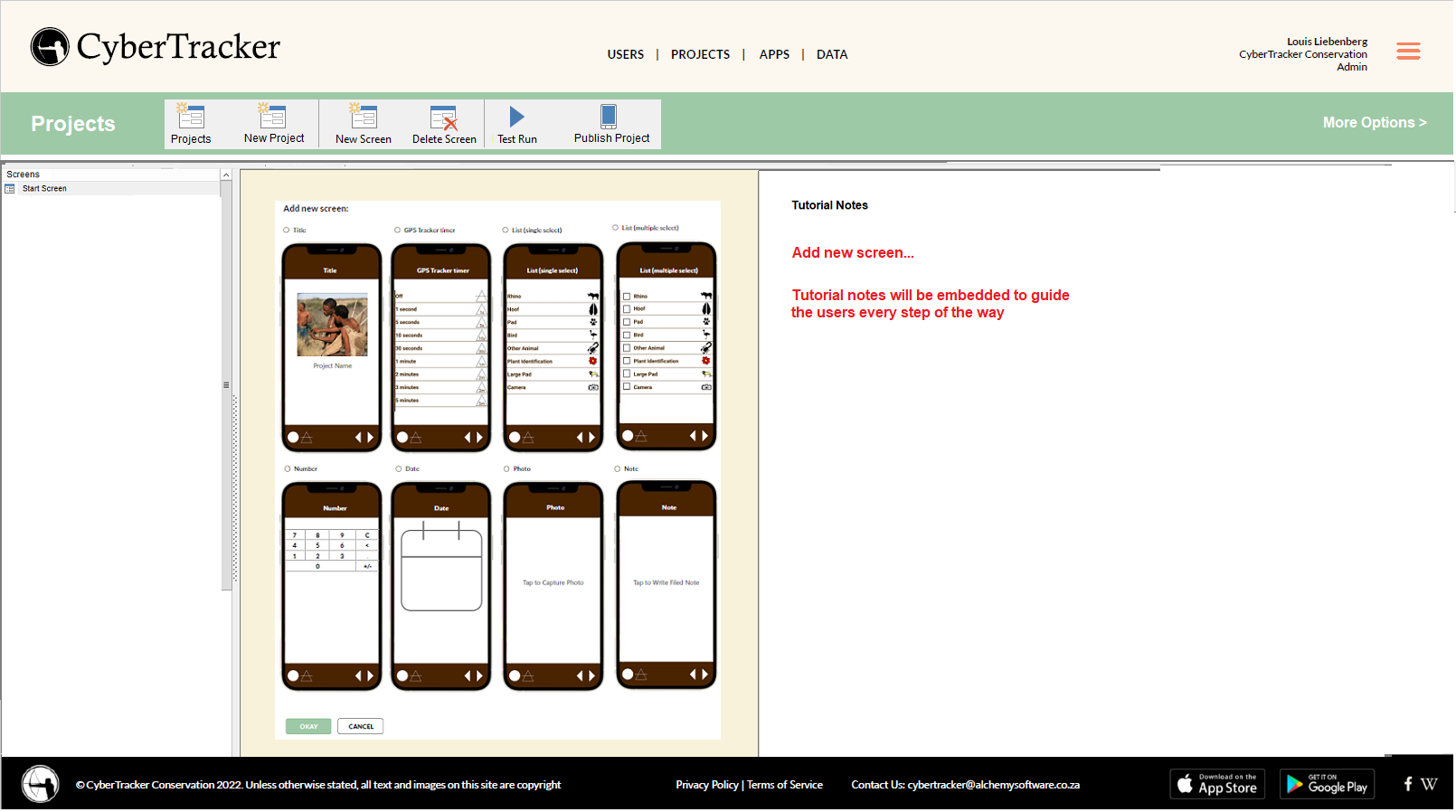 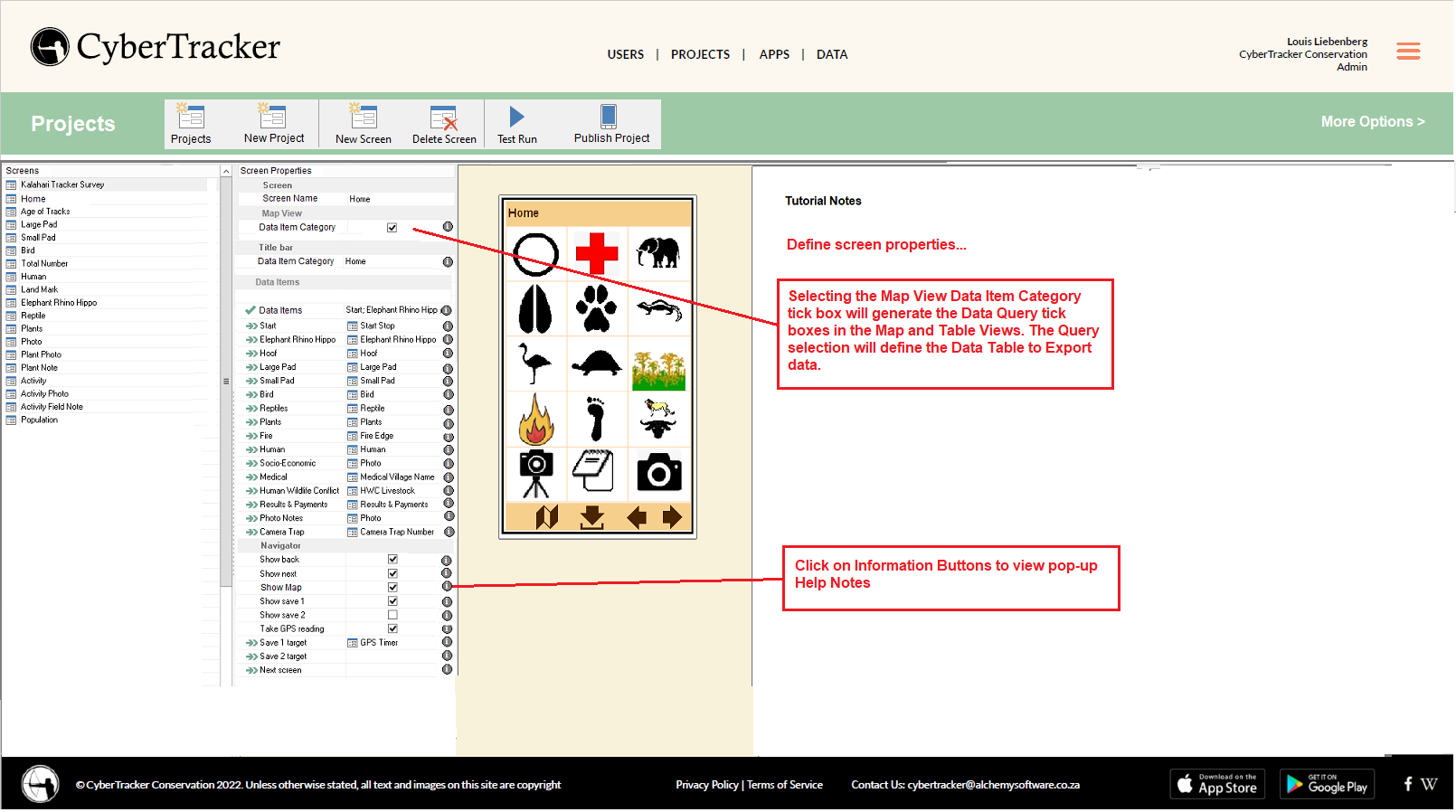 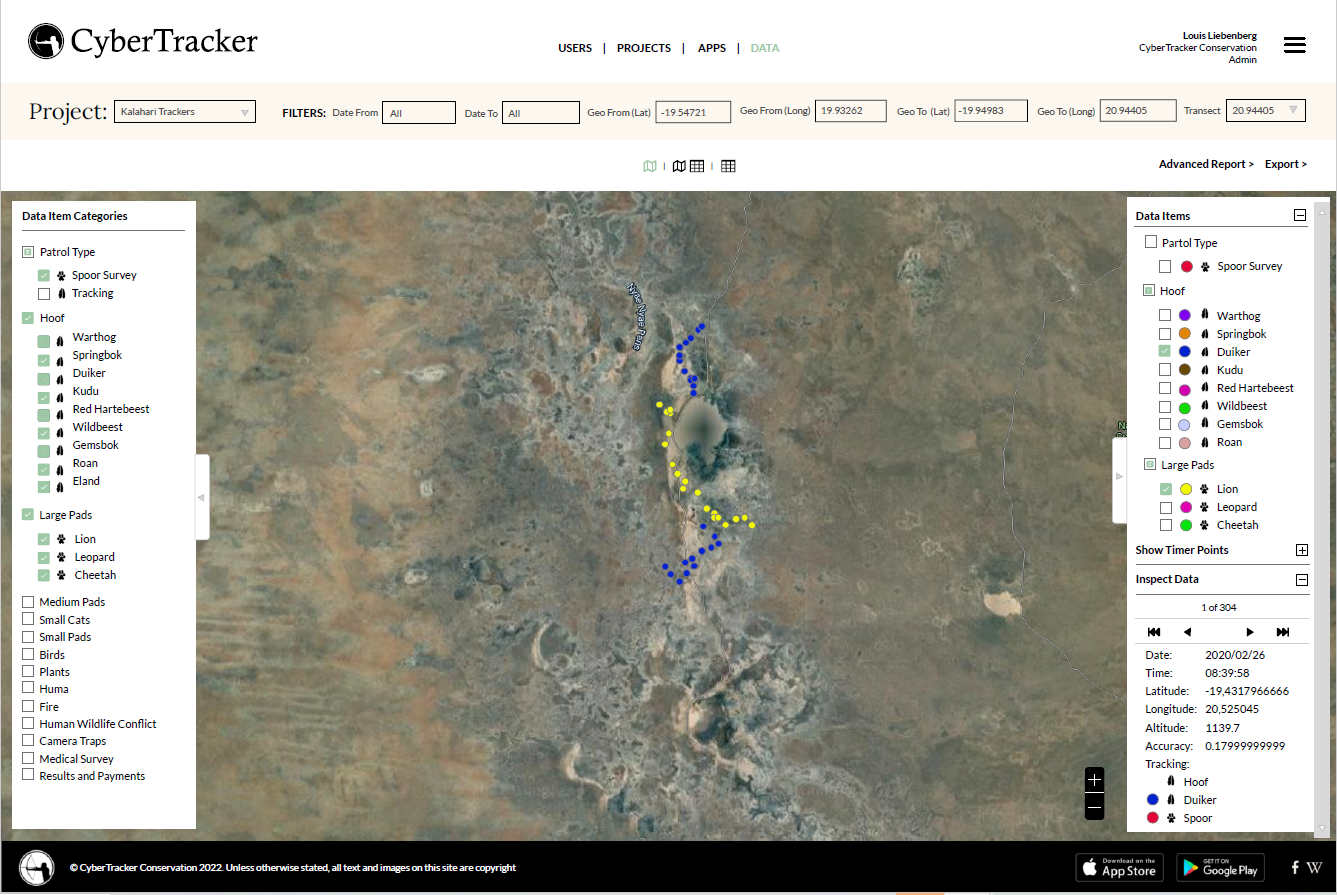 Map and Table views allows nontechnical users to query data. The query tick-boxes are
automatically generated by CyberTracker based on the data categories captured by the mobile application. The map and table views therefore require no GIS skills. Data can be Exported in various file formats (such as Excel and Shapefiles) for advanced data analysis using analytical software tools.

Our flagship pilot project is the Kalahari San Master Tracker Project . A team of Master Trackers have been mentored to conduct tracker training and certification of the younger generation of trackers. They are using the CyberTracker software to gather data and conduct animal track surveys. The project aims to build capacity in developing indigenous tracking skills as well as using the CyberTracker software. 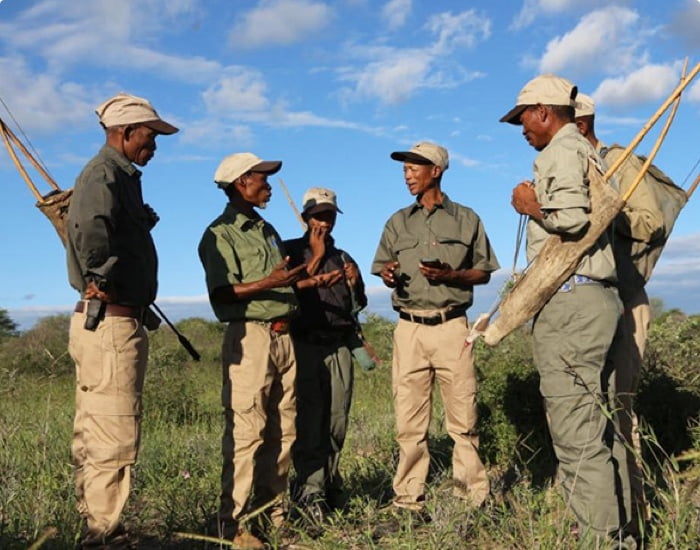 We have also been commissioned by UNESCO to write a paper on the certification of indigenous tracking skills , in order to replicate the process with indigenous communities worldwide.

The field programme will allow us to refine the software for real-world field conditions within the socio-economic and cultural context of indigenous communities. As we scale up CyberTracker Online worldwide, additional refinements may be made in response to requests from field projects in other parts of the world.